This page is being added to weekly 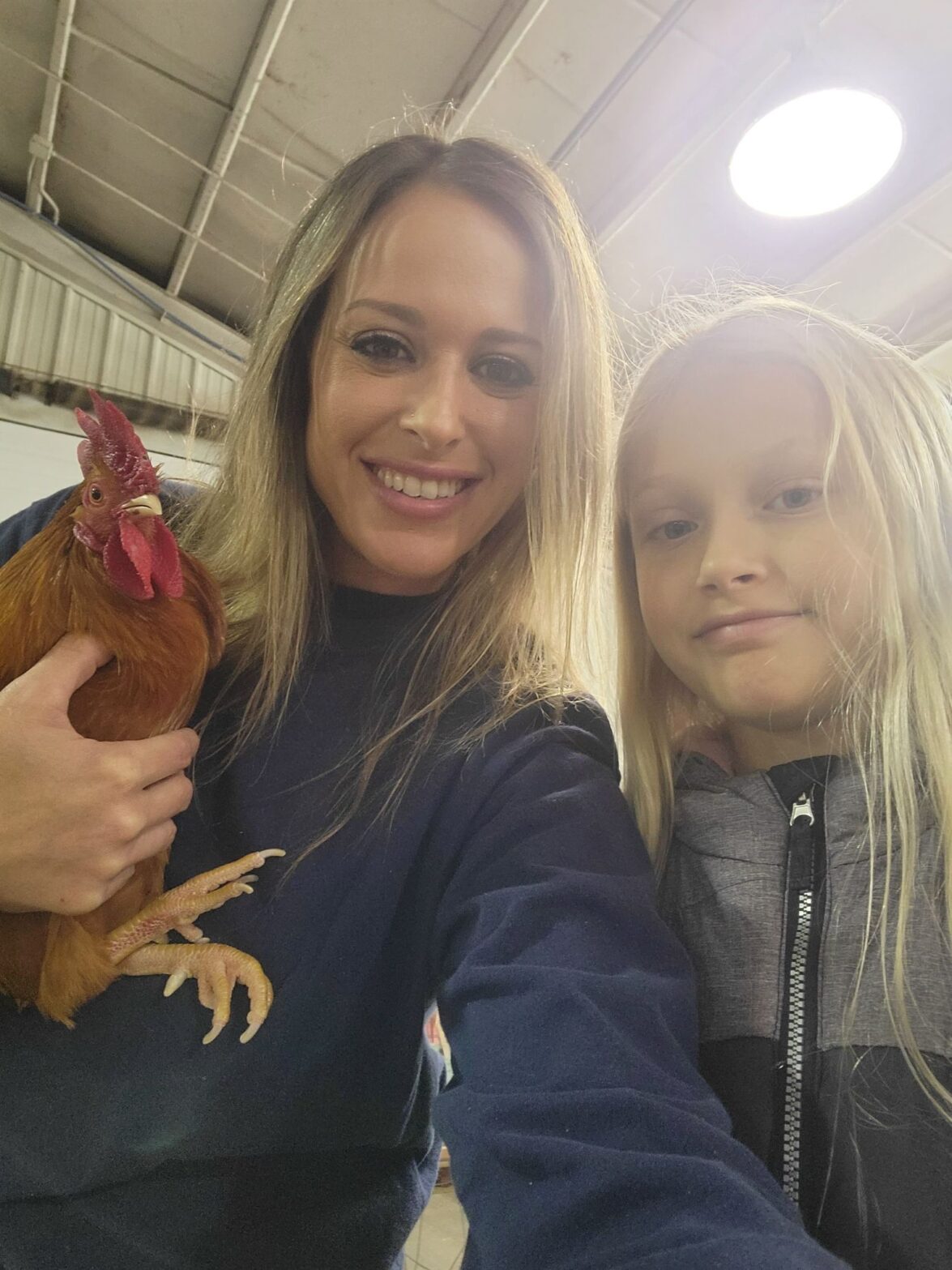 Hello fellow poultry enthusiasts! My name is Tarah Payne. I have owned poultry since 2010. 2023 marks my 5th season of showing. I sometimes look back and wonder how I managed to do it. This hobby takes a lot of work, dedication, planning along with blood, sweat and tears. During the last 5 years, I’ve noticed the women in this hobby silently working just as hard if not harder. Not just with exhibition but behind the scenes putting on some of the best poultry shows across America. This will be the spot where I get to highlight those hard working women. I am honored to do so. I will also be spotlighting youth that have worked just as hard in their short poultry careers. They are the future of this wonderful hobby !  Upcoming feature stories are listed below. Tarah

Tarah Payne is from Iowa. She has a top line of Marans and New Hampshire Bantams. Tarah and her two daughters are active in poultry shows ranging from IA, IN, WI and the MEGA SHOW. Tarah is also Assistant Show Manager of the MEGA SHOW and she is also a member and District Director of the Marans Chicken Club USA. She was also the highest point setter for the Marans Chicken Club Club USA for 2022. The rankings are listed here. 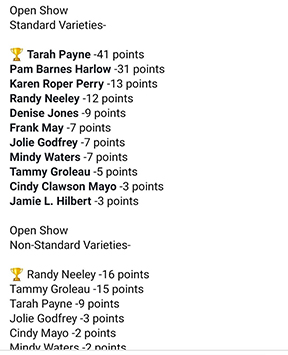 Coming Soon – Keira Dawn- OK, plus MANY others. 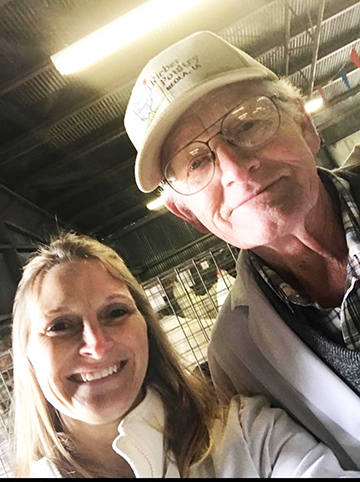 Greetings my fellow poultry enthusiasts. My name is Diana Dahir from Minden, Iowa.
Have you ever wondered how a young lady gets her start as a poultry judge? Well, here is my
story to share. I was born and raised in Iowa and live there today. My Dad, Art Rieber and I
became the first father-daughter judging duo in 2010. My Dad was the reason that I chose to
pursue my licenses. As the oldest of 4 siblings, I wanted my Dad to see a child of his follow in
his footsteps. Poultry has been his life long passion. Having grown up attending shows with my
Dad, raising my own birds and running a poultry show for 20 years, I had done just what my
Dad desired, to have someone follow his lead. One of the best decisions I have ever made. My
Dad asked me in 1997 to be the United Poultry Fanciers show secretary. It was a new Iowa
Poultry Club that Judy McAlexander and her family, Bob and Dee Mejstrick and my Dad had
started in Avoca, Iowa. This was the greatest training a girl could ask for. I met exhibitors and
judges on a new level. I learned the ins and outs of hosting a poultry show. My Dad taught me
integrity and fairness, led by his example. Then with the help of some of the best judges in the
country like Jim Sallee of CA, Bart Pals of IA and Gary Overton of IN, I grew more
knowledgeable and confident while preparing to get my licenses. 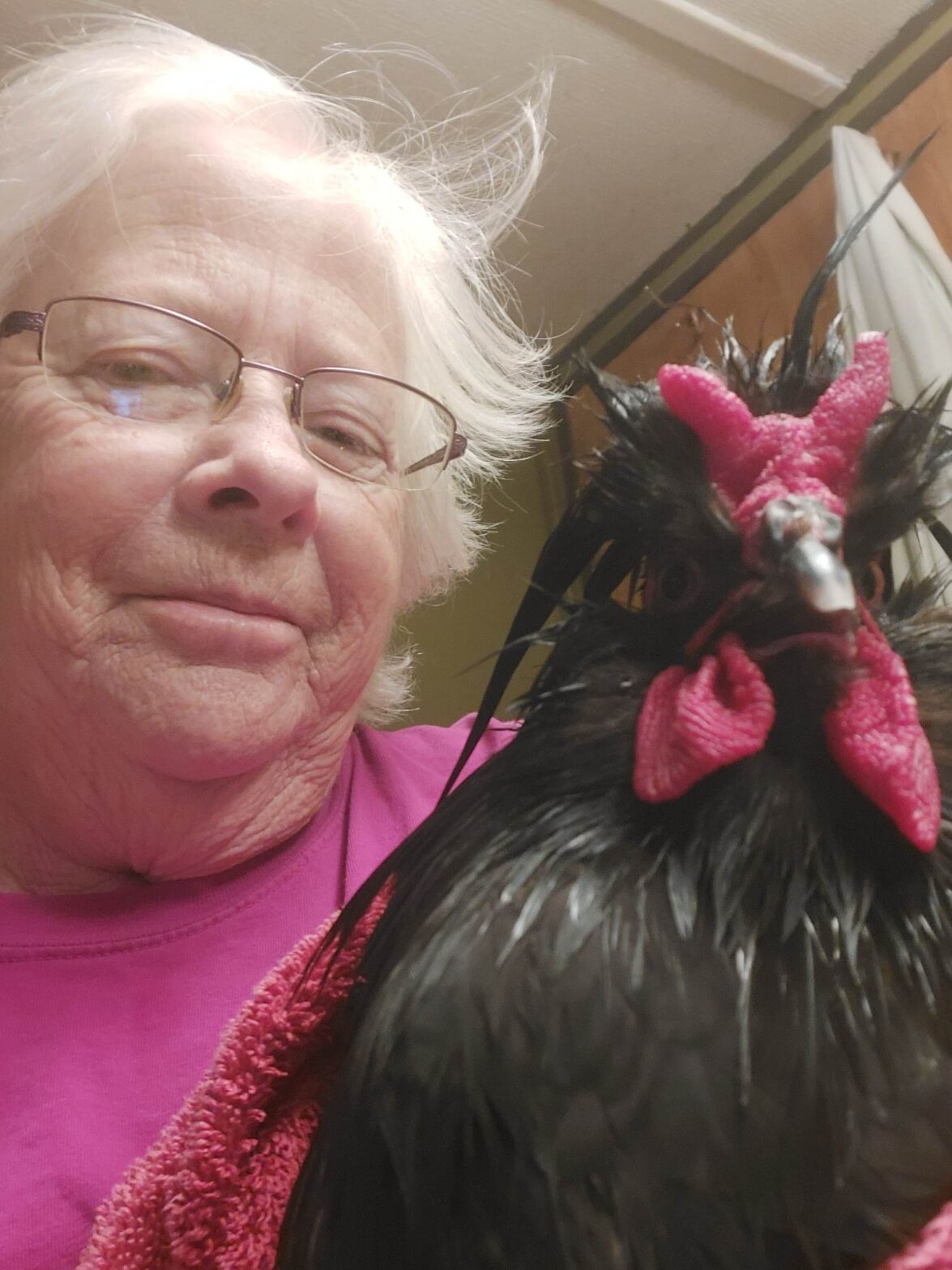 Perusing the internet one afternoon came across an ad for the Livestock Conservancy. I clicked onto their web page and began reading. I had no idea that animals were endangered on becoming extinct. As i read more, I realized chickens were a huge part of the list. Pondering for awhile, i thought, well, i could do something, pick a breed and help get it off the endangered list. after all , I thought, I had backyard chickens. So I began looking through all the different breeds listed on the critically endangered list. i was enamored with the Crevecoeur. Reading this birds history, i became determined, this was the bird for me! I was able to research the Livestock Conservancy breeders list and found a breeder close enough to me to get stock. After a series of emails, I obtained 12 baby chicks, driving 5 hours each direction to fetch them home. And so began my journey with the Crevecoeur. 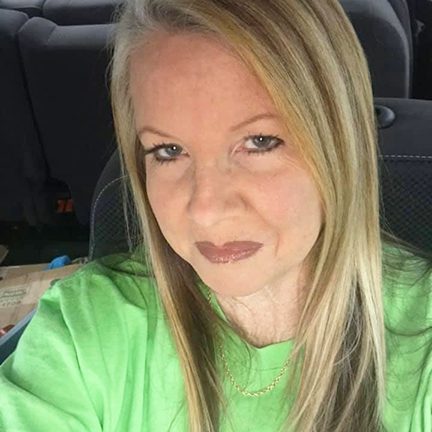 My work schedule is crazy. I work out of state a lot. I live in Arkansas. I started with poultry 9 years ago. I had 15 chicks and 2 ducklings.

As they grew I added more ducks. Then I got some Guineas. Next I
got some turkeys. At one time I had over 100 chickens, 8 breeds of standard ducks.
6 colors of Guineas and 2 breeds of turkeys. I got my first call duck by mistake and I was hooked on calls. I got more calls from Cindy Rush. I moved from Oklahoma to Arkansas the last of 2019. I sold all of
my birds but kept my calls and a pair of normal Mandarins and
brought them with me. Once in Arkansas my wild species grew. I now raise Mandarins, Ringed Teal, Marbled Teal and Hottentot Teal, also
known as Blue Bill Teal. Plus 16 different colors of call ducks. I’ve been very lucky in that I’ve met some amazing people along the way and am proud to call them my friends. Cindy Rusk and
Elizabeth Morgan have encouraged me to start to show. I am willing
and ready to do so. My hold back once again is my job. I can’t wait to change things so
that I can get out there and show off some of my babies. Here is just some of my waterfowl.

Hi My name is Cindy Rusk. I’ve been raising poultry for 12 yrs I got started later in life and wow have I sure missed out .I absolutely love poultry. I raise 14 different colors of waterfowl and I raise Cornish, Shamo, Golden and Buff Sebrights , Serama , Ohiki , Kiriki, laughing chickens and long crowers chicken breeds! I have also mentored several youth and have donated to several shows for awards .I love raising birds and have been showing for 10 years . I’ve traveled to several shows and have met some wonderful people and have made some great friends . I also raise Royal Palm Turkeys, Brown and Buff African Geese , Pigeons , and Toulouse Geese as well.

My advice to new Adults, and Youth as well, is to never give up . Pick a bird that you really enjoy and run with it. Never be afraid to ask questions . We have all gotten advice from others when we started out . You can learn so much from seasoned Breeders. Just always remember its a hobby . If you show you might win some and loose some but always make it fun . 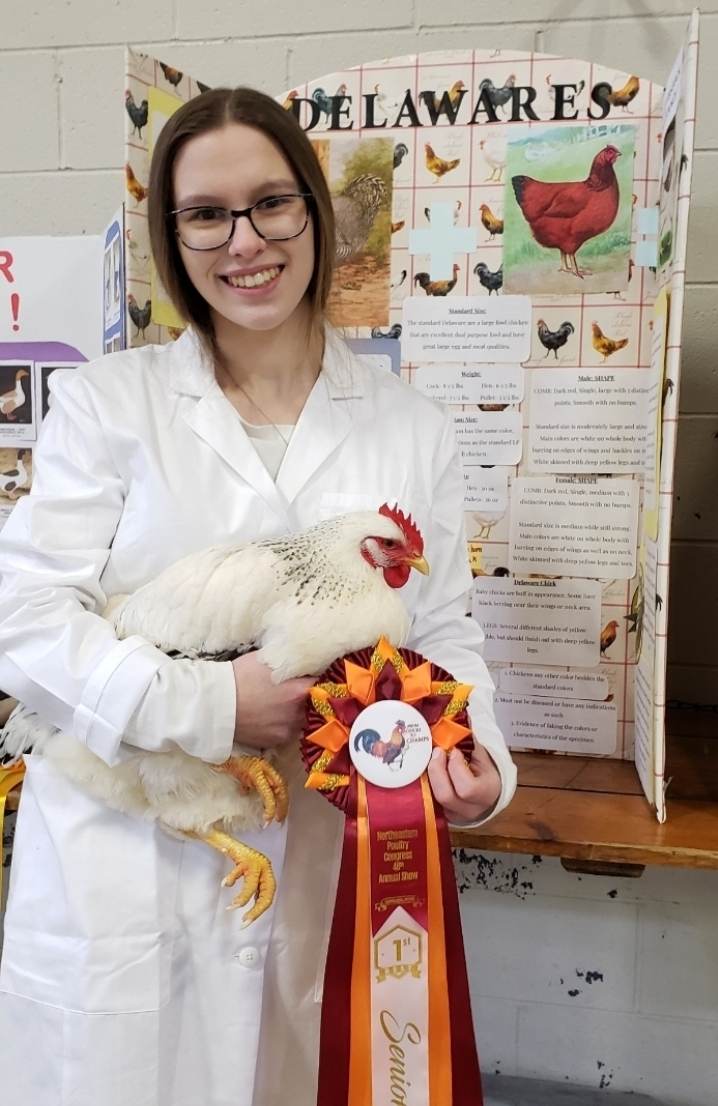 Hi there Tarah! I’m currently 18 and a 2022 graduate of an agricultural high school where I studied animal science. I am now a pre veterinary student at Uconn where I’m head herdsman of the poultry sector. I am curranty compiling a syllabus and educational content for next year’s freshman regarding poultry husbandry, anatomy, systems and showmanship. Along with college, I am a part time veterinary technician at a mixed practice named Fenton River Veterinary Hospital. At this hospital, I have the privilege of being frequently consulted for my poultry health knowledge by my doctoral colleges. As of 2021, I breed large fowl Delaware’s, of which there are an estimated 1000 breeding birds in the United States. I selected this breed because I want to make a positive impact on heritage poultry, and this was a bird not terribly far from extinction only a few years back. They are also beautiful, hardy and dual purpose. Additionally, I am starting a side project of breeding Bourbon Reds because I would really like to see more Turkeys in the show world. I am currently working under the wing of Dan Castle to hopefully become a licensed APA/ABA judge before I finish my undergrad and travel west for Vet school. I have been showing poultry in 4h as of 2016, but didn’t compete in my first APA/ABA show until 2019 when I attended Boston for the first time and immediately fell in love with the showroom. Since then, I have been competing in showmanship at every show I attend, and this year, I had the honor of receiving the title 2022 Ohio National Senior Showmanship Champion.

I would love to be an advocate for other young woman who are interested in poultry.
Mia Beaulieu – CT